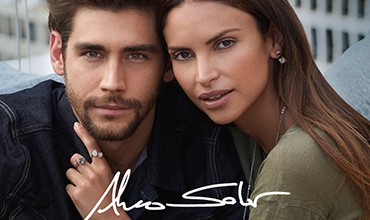 BROSWAY has chosen an exceptional lead for its new advertising campaign: ALVARO SOLER, the new X Factor judge whose 6 times multi-platinum single SOFIA has over 40 million views on Youtube. SOFIA, an international success that stormed up all the charts, both gives the film its title and inspires this extraordinary cinematic tale created for the television and web. As Soler himself says, “Sofia is the true story of a love affair that is over, but in this film conceived by BROSWAY I now want to tell the story of a great love reborn.” So SOFIA is now an absorbing love story with a recurring theme that leads up to a great final twist thanks to an item of BROSWAY jewellery. This short film, directed by Giovanni Bedeschi and lasting about 3minutes, will be premiered in Octoberon TV, the web and social media. Brazilian actress and model CAMILA MORAIS appears longside Alvaro Soler in the role of SOFIA, in a fascinating performance to the Lyrics version of SOFIA that has been specially arranged for this film. This new BROSWAY campaign is supported by a huge programme of commercials on all the major national TV channels, as well as an unmissable special presentation during the X factor live shows. And the stunning campaign shots with Alvaro Soler and Camila Morais will also appear in the major women’s and lifestyle magazines. There’s already a great air of expectation in all BROSWAY sales outlets for the arrival of the new jewellery and watch collections for women and men.